Cristina Freire, born in Rio de Janeiro 1961. Holds an MA in Museum and Galleries Management at the City University, London, and a PhD in Social Psychology at the University of São Paulo , studying the role of the monuments in contemporary cities, thesis published in the book: Beyond the maps. Monuments in the urban contemporary imaginary. São Paulo, Annablume, 1995. Since 1990 is a curator at the Museum for Contemporary Art in São Paulo and also a lecturer in contemporary art at the University of São Paulo. As a result of a long-term research project, published the book Poetics of the Process. Conceptual art in the Museum, São Paulo, Iluminuras, 1999. Organised the largest exhibition of Conceptual Art from the 1970’s in Brazil; Conceptual Art and Conceptualisms. The 1970’s in the Museum of Contemporary Art Collection, São Paulo (2000). Among other exhibitions was the curator of Almost ephemeral art: Records of performances, actions, situations (2001) and Experimental place for freedom: the Museum of Contemporary Art in the 1970’s (2002). Between 2000 and 2002 together with three other curators joined the research project Rumos – Itaú Cultural Artes Visuais. The aim of this curatorial project was a nationwide survey of young artists. She was co-curator for the 27th Biennial of São Paulo in 2006. 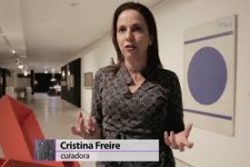