Committed, Politicized, or Operative: Figures of Engagement in Criticism from 1945 to Today Hélène Jannière (Université Rennes 2) and Paolo Scrivano

Committed, Politicized, or Operative: Figures of Engagement in Criticism from 1945 to Today
Hélène Jannière (Université Rennes 2) and Paolo Scrivano (Politecnico di Milano), scientific coordinators of the Mapping Architectural Criticism network, are guest editing the next issue of HPA – Histories of Postwar Architecture and are very pleased to announce the call for papers on the topic Committed, Politicized, or Operative: Figures of Engagement in Criticism from 1945 to Today.
Deadline for paper submission: July 31, 2020
Presentation
In a 1995 article on the renewal of architectural criticism, French architect and critic Bernard Huet referred to Charles Baudelaire to define art criticism as necessarily – in the poet’s words – “partial, impassionate, political”. During the 1990s, perhaps as a reaction to the 1980s, when in many specialized publications architectural criticism was identified as “communication” or even as promotion of architects and architectures, it emerged an extensive nostalgia for a notion of criticism associated to the historical avant-gardes. In this “committed” criticism or in the “politicized” one it was possible to emphasize the critic’s influential and active role in discovering, promoting, and intellectually supporting groups of artists or architects. The idea of a “golden age” of criticism has thus spread, being from time to time related to the end of the 19th century, to the 1920s, and to the 1960s and 1970s.This issue of HPA intends to collect studies devoted to historical examples of “committed” and “politicized” criticism, reflecting on the real meanings of these concepts and on the themes and subjects to which they are tied. On the one hand, the figure of “committed” critic might be linked to the art and architecture avant-gardes from the end of the 19th century onward, hence defining a privileged relationship between critic and artist/architect; on the other, “politicized” criticism can be characterized as the understanding in political terms of architectural and city phenomena. Among the questions the issue wants to address are: in which way do these definitions of “committed” and “politicized” criticism come close to or differ from the definition of “operative” criticism, in the various meanings that have been attributed to it since Manfredo Tafuri? What are the theoretical tools, the rhetorical constructions, and the intellectual and political references of “committed” and “politicized” criticism? Should the latter be necessarily bound to the author’s belonging to a party or political group? What are their principal ways of circulation (specialized periodicals, journals, targeted actions)? In which measure did “politicized” criticism influence architecture’s historical narrative? And finally, what are the interlacements and the convergences between criticism’s intellectual and artistic engagement and the political commitment?The issue of HPA intends to include contributions dealing with specific case studies or themes, with a periodization that spans from the end of the Second World War to the present date. 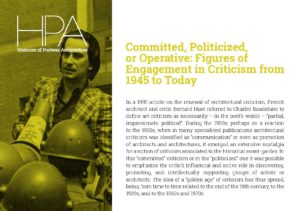 Guidelines and deadlines
Please find the complete guidelines and deadlines for the submission in the pdf attached.
About HPA
HPA – Histories of Postwar Architecture is a biannual open-access peer-reviewed Journal that aims to publish innovative and original papers on post-war architecture, with no geographical, methodological, historiographical or disciplinary restrictions.
Find more information about the journal here.